There is much publicity - and rightly so about the proposed wind power stations in the most beautiful and scenic parts of Scotland. Last years I had the privilege of taking part in Alan Sloman's 'Wake for the Wild' protest which opined the death of Scotland's wild land due to the proliferation of wind power stations. It took place on Dunmaglass estate which is beautiful (or it was beautiful last time I looked - that will change) and part of Alan's motivation was that Dunmaglass is bang on the route that he has taken on one of his many The Great Outdoors Challenges. Dunmaglass had a special place in his heart.

Over the years, Alan watched as more and more wind power stations appeared in the scenery that he loved and then when consent was given for Dunmaglass it was the last straw and he felt the need to make a high profile protest and he succeeded. Ultimately though and he knew this at the time, it was too late. Dunmaglass had already been approved and so the wind power station steamroller rolls on. 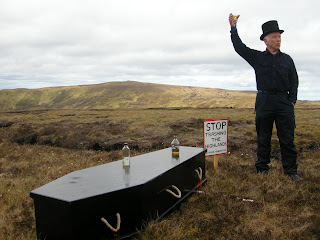 A massive development at Allt Duine adjacent to the Cairngorm National Park is on the cards. There is talk today of a massive development on the slopes of Ben Wyvis - an iconic Munro north of Inverness and so it goes on. People know where the Cairngorms are, they are in the minds eye of everyone who loves the Scottish outdoors. The same people instantly know what you are talking about when you say the word Munro and everyone who comes to visit Scotland for its outstanding beauty and wild character has their own favourite spot.

There is much talk too about the visual impact of large scale developments and whether or not they will deter tourists from coming to the area and thus affect the local economy. Local newspapers are full of people who say that wind power stations don't bother them and that it wouldn't affect their enjoyment of the area. So does that make it OK? No I'm afraid it doesn't. The views of visitors to the area are crucial, but I sometimes think that campaigners miss the fact that the people who live in Scotland don't get to go home at the end of their two week holiday and forget that these turbines exist. As more turbines are built, more people will have to  live with them and their effects. They don't only get built in remote wild areas, they get built right next to peoples houses and right next to roads which are used by thousands of local people to commute.

I have the good fortune to live in a rural area about eight miles south of Elgin in Morayshire. It's not anywhere that most people would recognise as being 'iconic' or 'of outstanding natural  beauty' but it's where I live and I love living here. I look out of my window (that was designed to make the most of the view) and I see fields and a hill called Brown Muir as a backdrop.

I love watching the sunset over Brown Muir. I love watching the way the hill changes colour when the heather blooms each August. I love watching the cloud and mist roll in down the glen and I love the way that the snow fills in all of the little nooks and crannies as it falls. I walked Brown Muir a lot when I was training for the Pennine Way and it has a special place in My Heart because it's the view I see every single day of my life when I open the blinds each morning. 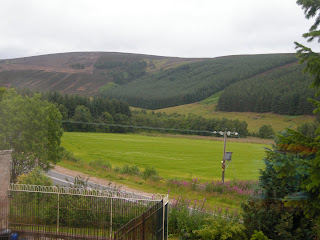 So the perceptive amongst you may see where this is going. In July last year, just as I was finishing walking The Pennine Way, I got word that there was a plan to build a wind power station on Brown Muir. To cut a long story very short, we protested, emailed, petitioned and did everything we could along with our neighbours to try and dissuade the developers from going ahead but last week they submitted a Section 36 application to the Scottish Government to build 19 turbines, each 125m high. They have 'consulted' locally for what it was worth with pictures of dandelions and polar bears to sway the uninitiated. They used the usual tactics of asking questions which were designed to elicit a sympathetic reply and offering 'community benefits' which are otherwise known as 'bribes'.

I occasionally encounter the local landowner at business meetings and am torn between wondering how he sleeps nights knowing that he is selling off his family's silver to line his pockets and thinking that it must be difficult to resist when large sums of money get dropped in your lap for doing not very much.

Moray has its fair share of wind turbines and they have crept in over the years pretty much under the radar of most local residents. Now they are here to stay do we stand much chance of stopping the building of more? The development at Brown Muir is symptomatic of the developers going for the 'easy' option that they think won't attract any large scale objections.

The Scottish Government has made it known that it wants wind power stations built to meet their targets. They bang on a lot about only allowing ones that are sensitive to the environment and taking each application on a case by case basis but they are only playing lip service to the view of anyone except the developers and landowners who stand to gain from them.

We are normal little people with normal little lives. We don't have hundreds of thousands of pounds to spend fighting this and we don't have unlimited time available to us. We need as many objections as possible to be submitted on the basis that Moray already has enough turbines in existence and in the planning stages and that the visual impact of this development on the local environment will be substantial.

In my view Alex Salmond wants this to be his shot at immortality. He wants to be remembered as the First Minister who set these targets and then met them. He will certainly be remembered.....

High above Golspie in Sutherland there is a statue of the Duke of Sutherland.

The Duke of Sutherland is generally regarded as being the architect of the Highland Clearances during which people were forcibly cleared from the land by rich landowners to make way for sheep which were far more profitable. It remains one of the most shameful chapters in Scottish history. It is not unknown for some people to show their disdain for the Duke of Sutherland's actions by walking the hill to his statue and then pissing on it.

In my view, Alex Salmond is as guilty now as the Duke of Sutherland was then of using the landscape as a cash cow and once again it's the rich landowners who stand to benefit. One day when Alex Salmond has his own statue (I have no doubt that he'll build his own if nobody else does) I will have no hesitation in going up to it and demonstrating my feelings in the most obvious way possible...... 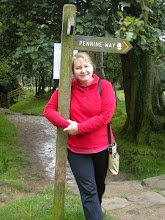 Janet Donnelly
Elgin, Moray, United Kingdom
I am an authorised celebrant for The Humanist Society of Scotland which means that I conduct non religious weddings, funerals and baby naming ceremonies for people who, like me, believe that we can be 'good without god' and that common sense, compassion and reason are our best guides in deciding how we live our lives. I love to be outdoors whenever I get the chance and have spent time walking the John Muir Trail in the Sierra Nevada USA as well as The Great Glen way, the Speyside Way and many many days spent exploring the Cairngorms and my local area.